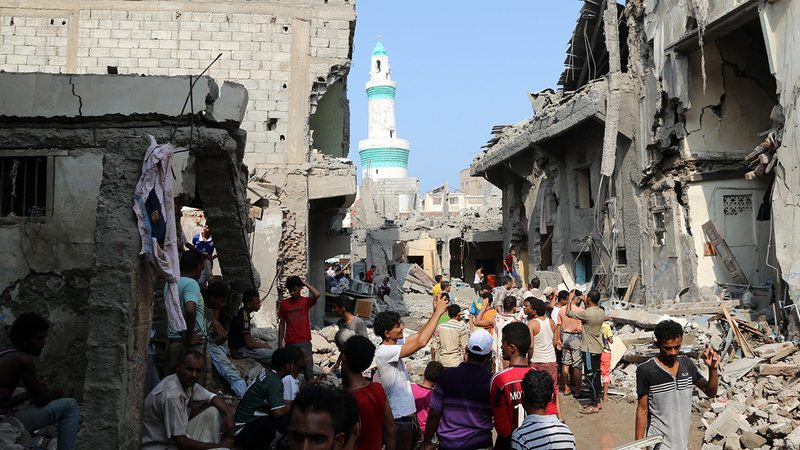 As a serious Yelper, being nominated for Elite status was an honor I accepted without hesitation. Since joining the Yelp Elite squad in 2014, I’ve been treated to exclusive nightlife experiences such as dinners, wine tastings, and private parties—all free of charge. But along with all the perks of being an Elite member comes great responsibility. This is why, as someone with Yelp Elite status, I cannot in good conscious stand by and do nothing while the situation in Yemen continues to deteriorate.

Since 2015, the Yemeni government has been locked in a brutal power struggle with Houthi forces that currently hold the country’s capital. Saudi Arabia, aided by the U.S., has supported the Yemeni government with airstrikes, which have caused mass civilian casualties. The conflict has also drawn in Al-Qaeda and ISIS forces, adding to the widespread chaos and bloodshed in the region. With so many urgent problems and no real solutions taking shape, I strongly feel it is my moral duty to use my Yelp Elite status however I can to help bring the situation under control.

After all, I didn’t write thorough reviews of 153 restaurants, 32 bars, 18 nail salons, seven laundromats, and three national parks to just stand around scratching my ass while Yemen cries for help—I did it to become an influencer. Right now, so few Americans are even aware of Yemen’s plight, and I earnestly believe that the witty yet informative voice I honed over my years of Yelping could be harnessed as a voice for the voiceless Yemenis. I could broadcast the plight of the afflicted through my write-ups of new brunch places and tire shops, and thanks to my highly respected Yelp status, the world would hear.

If the powers that be let me, I will apply the same analytical skills that got me to the top of the Yelp food chain to the situation in Yemen, and I believe it could make a huge difference.

It took bravery to give my honest assessment of Burger King. When I ended up going with four stars overall and calling its Original Chicken Sandwich “the best fast food chicken sandwich, period,” I knew it would ruffle a few feathers. But I stuck to my guns, and it’s that exact boldness that attracted the Yelp Elite Council to me in the first place. And it’s going to take boldness like that to deal with ISIS, the Saudis, and all of the warring forces involved in the crisis in Yemen. The future of the Yemeni people is at stake, and mealymouthed hand-wringing isn’t going to cut it.

If the powers that be let me, I will apply the same analytical skills that got me to the top of the Yelp food chain to the situation in Yemen, and I believe it could make a huge difference. I could dig into every last detail of Yemen’s circular unending violence the way I do when I dissect my experiences at Krispy Kreme chains, where I don’t just point out the problems but also offer concrete, helpful suggestions for improvement. And by doing so, I could find solutions to the crisis in Yemen. If you doubt my power, consider this: My negative review of Bowl-A-Vard Lanes singlehandedly brought its near-perfect five-star rating down to a 4, something that not every run-of-the-mill Yelp user has the clout to achieve. Yet as a Yelp Elite user, I have power to effect change. And hopefully, power to heal.

Not just anyone can achieve Yelp Elite status. Most never will. But as someone who has been granted the rare privilege, I believe it would be criminal for me to remain silent on the human rights abuses and senseless killings being carried out in Yemen. And I would like to use not only my Elite voice for good, but also my perks. When I’m awarded invites to private whiskey socials or art gallery first-looks, I would like to send those invites to displaced Yemenis in need. And if I can somehow forward my product sample baskets and members-only discounts to Yemenis, I would like to do that also.

If my fellow Yelp Elite squad members are content soaking up all the perks of Elite status without lending their voice to the innocent victims of the senseless war in Yemen, that’s on them. But my conscious simply won’t allow me to write a review entitled “Mr. Chow’s UPDATE: 3rd Visit” without devoting at least a paragraph to fighting for the survival of the children of Yemen. I must not waste the powerful platform I’ve been given. I am ready to use my Yelp Elite status to change the world.