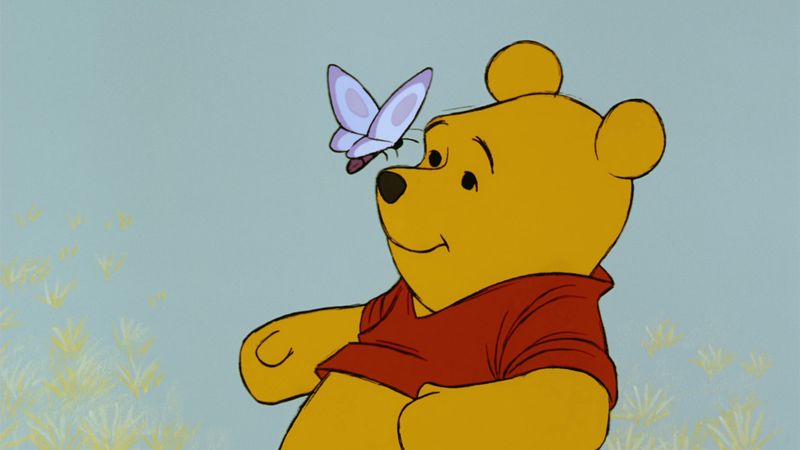 As a parent, I feel like everywhere I turn, someone is warning me about the dangers of letting my children watch TV. While I agree that it can be harmful in large doses, honestly, what really matters to me is just making sure that when my children do watch TV, they’re watching shows that impart some sort of positive value into their lives. This also means steering them away from programs that might affect them negatively, which is why I never allow my children to watch anything featuring Winnie the Pooh, the fat virgin.

If you’re unfamiliar, Winnie the Pooh is a brainless bear who lives in the forest and slowly makes the world bad. He has beady serpent eyes and zero genitals, which is something we know because he never wears any pants or undergarments. In fact, he’s practically bragging about not having a penis. But even if he did have a penis, he wouldn’t know it, because his fat belly would keep him from seeing anything below his sad bear tits. It makes me mad just thinking about it. This bear, he just wanders around eating honey out of a jar with his bare hands like a fat savage. I hate it.

One thing that can be assumed about the dickless sad sack called Winnie the Pooh is that he is a virgin. He clearly has never fucked. He is a simpering, high-voiced virgin who spends all his time leering at a little boy named Christopher. It’s disgusting. I don’t want my kids being exposed to that. I’m not going to be like, “Hey, kids, come watch the emasculated bear with the scary fingerless hands who’s never fucked a day in his life and who is obsessed with a little boy of a different species.” That’d be irresponsible and gross.

He is a simpering, high-voiced virgin who spends all his time leering at a little boy named Christopher.

“But what do you let your kids watch?” you might ask. I’d much rather my kids watch the fuck machine named Big Bird. Big Bird is the towering human bird from PBS who you can tell is just constantly fucking. He’s got that swagger. There are a lot of good lessons children can learn from a major-league pussy-crusher like Big Bird, such as the importance of confidence, courage, and friendship.

Winnie the Pooh, on the other hand, wouldn’t know the first thing about courage. If he were on United Airlines Flight 93, for example, not only would he have not joined the revolt against the terrorists, but he probably would’ve gotten down on his yellow knees and sucked the terrorists’ cocks one by one. “Oh, bother!” he would shrug as the al-Qaeda operatives drilled the back of his throat with their pube-slathered ding-dongs.

What a coward, this pathetic bear.

I cannot fathom how any parent could ever willingly expose their children to trash like Winnie the Pooh. It seems like a guaranteed recipe to ensure that your kids grow up to be pitiful, dead-eyed perverts who will never know the heavenly joys of fucking. If you want your kids to grow up to be brave and smart, you should let them watch either the impressive sex duck Big Bird, the cunning potato named Arthur, or Babar the indoor elephant. Winnie the Pooh is a walking disease, and if I ever catch my kids watching him, I will spank them with my belt. And if you’re a good parent, you will do the same.