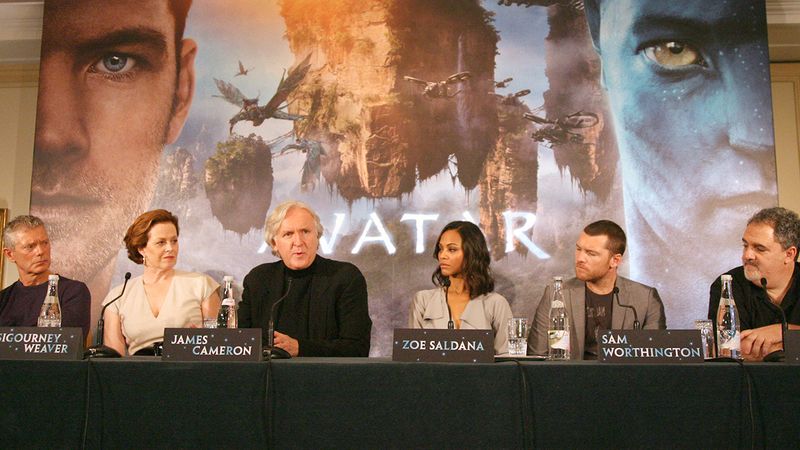 Times are tough across the country, and I’ve been a little short on green myself lately. Now, I’m no stranger to rolling up my sleeves and working hard for my dough, but that being said, I have to admit it: I think it would be great if I could get a little bit of that Avatar money.

There’s plenty of that Avatar pie to go around, and I’d love to get a taste.

We aren’t talking about just any film here—we’re talking about the top-grossing film of all time: Avatar. $2.7 billion at the box office. Billion with a capital “B.” Plus all the DVD, Blu-ray, and streaming sales on top of that. It’s impossible to even comprehend how much money Avatar has earned, but one thing’s for sure: There’s so much of it that a little piece of that action for myself wouldn’t be missed at all.

Cameron’s garage is probably so filled with Avatar dough that he can’t park his car in there.

Hell, just 1 percent of the money Avatar raked in on alien Halloween masks alone would probably set me up for life.

You know how in mob movies the gangsters end up with so much dough that they’ve got to bury it in their yards or hide it in their mothers’ couches? That’s how it is for anyone who was involved in the production of Avatar—just bursting at the seams with cash. Cameron’s garage is probably so filled with Avatar dough that he can’t park his car in there. He could give me a minute in there with a duffel bag and it would change my life forever. No skin off his back.

If I could get just a tiny little decimal point of that Avatar cash here’s what I’d do: Quit this dead-end job, finally take care of my 2012 taxes, and sign up for health insurance. After I took care of all that it’d be time for a little fun: Get myself a little bungalow down by the beach, buy the little lady a nice brooch, get the Cutlass running again… nothing too crazy. I’d invest the rest, and the Avatar people would never hear from me again.

It would be nothing to take out the Avatar checkbook, write a 1, start adding 0’s to it without even counting them, and hand me the check. $100K of the Avatar cash finding its way to my pocket is the same thing as me dropping a penny into a sewer drain. Maybe it will happen, maybe it won’t, but at long as those piles of Avatar cash are just sitting around gathering dust, I will never stop hoping.