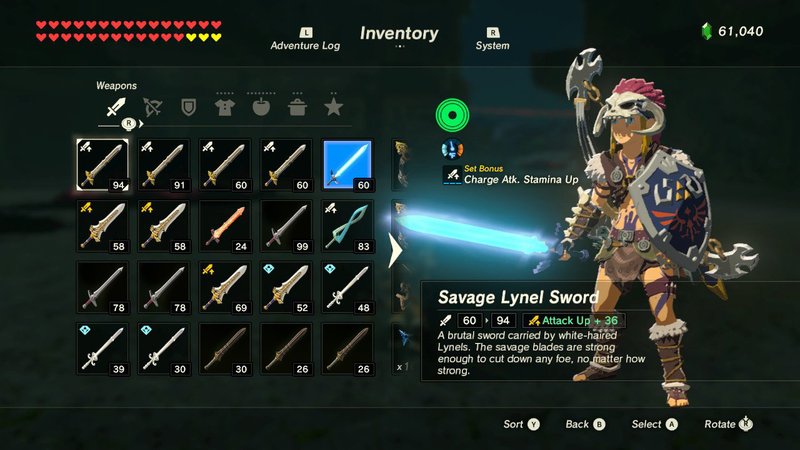 Some people would tell you we’re in a golden age of video gaming. Between incredible advances in graphics, a booming indie scene, and virtual reality just over the horizon, I am almost inclined to believe them. But while video games might be improving, nobody seems to be paying attention to what lessons the most impressionable gamers are learning from them. Like it or not, modern video games are giving kids totally unrealistic standards for how many swords they can carry at one time.

I make it my business as a mother to pay attention to the media my kids consume, and I don’t like what I’ve been seeing. I’ve watched them play video games where they can get 10, 15, even 20 swords, and carry them around without the slightest inconvenience. As an adult, I know that’s unrealistic, but children who haven’t even carried one sword yet can’t help but unconsciously internalize it as an impossible standard, one that’s setting them up for disappointment and frustration when carrying swords later in life. What kind of parent would I be if I just let that go unaddressed?

Of course, I’ve sat down with my children and explained that, realistically, a person can only hope to carry three swords at once, at most five, if they’re carrying one in each hand, too. The fact is, though, that video games are far more visceral and engrossing than any lecture can hope to be. They’ve experienced picking up longsword after broadsword after shortsword in full HD, complete with exciting sound effects and controller rumbles, and that’s going to leave way more of an impression than my unglamorous words of caution. Up against the thrill of a big-budget video game, a parent just can’t realistically hope to compete.

But out in the real world, I’m worried that they’ll be in for a rude awakening. I shudder to think of my kids grown up and staggering around with half a dozen swords strapped to their back and several on each hip, or worse, armfuls of unsheathed blades. How will they open doors? How can they possibly go up or down stairs? How many childhood gamers need to throw out their backs before we finally tackle this issue head-on?

When a generation that grew up thinking it can strap on nearly unlimited katanas, claymores, falchions, and gladiuses finally comes face to face with reality, it’s going to be ugly.

I’d love to be able to write these games off as harmless wish fulfillment, but what’s “harmless” about literally rewiring children’s brains to see effortlessly toting five swords, two axes, a dozen potions, and a hundred hobgoblin skulls as normal? Nothing.

I don’t believe the developers behind games like Skyrim or the new Legend Of Zelda are bad people, but I do believe they’re shirking their responsibility to our children. By creating thrilling, consequence-free sword-hauling simulators, they’re inadvertently teaching kids lessons about backpacks and weight limits that are going to be a lot harder to unlearn. In some cases, gamers are even being taught they can increase how many swords they can carry simply by trading in magic seeds or power jewels, as if their expectations weren’t unrealistic enough already.

When a generation that grew up thinking it can strap on nearly unlimited katanas, claymores, falchions, and gladiuses finally comes face to face with reality, it’s going to be ugly. People are going to get hurt, probably by tripping. When that day comes, if I were a designer who gave players dozens of inventory slots, I’d take a long, hard look in the mirror and ask myself what I could have done differently. And if I were one today, I’d ask myself what I could do right now to prevent some poor gamer from accidentally burying herself under a hillock of blades.

It’s not too late to be part of the solution.

Video games have so much to offer, from stimulating kids’ imaginations to telling immersive stories to encouraging social bonding. But as long as their creators keep slipping in irresponsible messaging about the capacity of a canvas rucksack, they’ll never reach their full potential. It’s long past time we changed that.